Jesus With the Squatter Children of Asia

Posted by David Michael at 12:15 PM No comments:

CRCC-FMI Sundays in Tagaytay and Other Occasions

C-RCC / FMI Working in Asia - Please keep FMI in prayer as the work continues in Tagaytay & Mendez, on the island of Mindoro, and with the Mountain Tribal people. Thank you!

Posted by David Michael at 11:35 AM No comments: 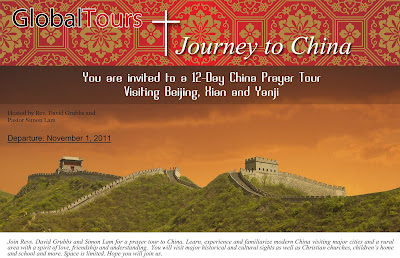 
East Bay Chinese - RCC Church and FMI is organizing an event of a life-time. Never before has there been a more important time to see God's plan for the future of China and other nations of the world like the United States. You can help shape and mold God' destiny for the foreseeable future.

This exciting opportunity has come up and we are happy to offer to those living in the United States and Canada a chance to go on a Group China Prayer Tour this coming Autumn.

How does this sound... 12 days to pray over three strategic areas? You will meet church leaders and Christians in each place to encourage each other and build bridges for friendship. You will be able to pray together with them. What are the three areas and why are they strategic? Number #1 Border area of North Korea, China and Russia. Number #2 the political capitol of the nation. Number #3 the Eastern terminus of the Silk Road and Ancient capitol of China... 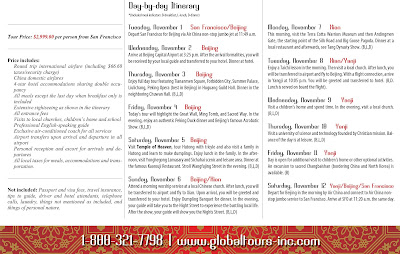 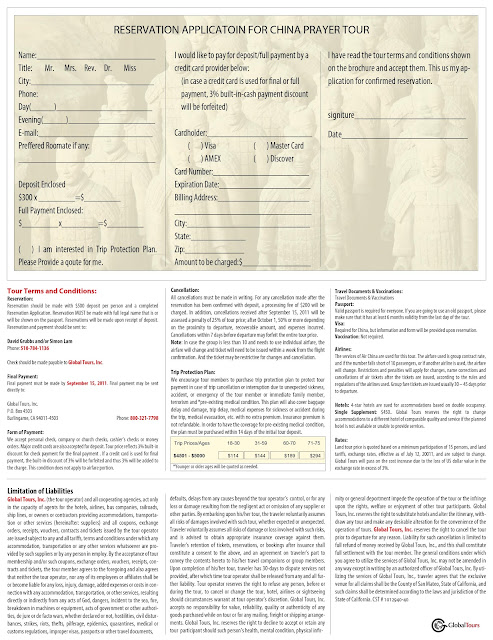 Posted by David Michael at 10:57 PM No comments:

Location #1:  Border Area of China with North Korea and Russia - Although the history of the current structure has been rather short, the new building does reflect the current growth of the Christian Community within Yanji City. With already a fairly long history, current city citizens are finding renewed faith and many others are swelling their ranks, for the first time being able to practice this religion.
The city Church of Yanji is part of the legal Christian Church in China, that is: it is not Roman Catholic, Protestant or any other denomination but is an officially recognized holy shrine, supervised by the Chinese Government ponsored National Christian Church.
Other chruches in Yanji go unrecognized and many Church groups go without an official prayer room or hall, and are considered part of the illegal or underground Church.

Tibet
Location #2:  The first Christians documented to have reached Tibet were the Nestorians, of whom various remains and inscriptions have been found in Tibet. They were also present at the imperial camp of Möngke Khan at Shira Ordo, where they debated in 1256 with Karma Pakshi (1204/6-83), head of the Karma Kagyu order. Desideri, who reached Lhasa in 1716, encountered Armenian and Russian merchants.
Roman Catholic Jesuits and Capuchins arrived from Europe in the 17th and 18th centuries. Portuguese missionaries Jesuit Father Antonio de Andrade and Brother Manuel Marques first reached the kingdom of Gelu in western Tibet in 1624 and was welcomed by the royal family who allowed them to build a church later on. By 1627, there were about a hundred local converts in the Guge kingdom. Later on, Christianity was introduced to Rudok, Ladakh and Tsang and was welcomed by the ruler of the Tsang kingdom, where Andrade and his fellows established a Jesuit outpost at Shigatse in 1626.
In 1661 another Jesuit, Johann Grueber, crossed Tibet from Sining to Lhasa (where he spent a month), before heading on to Nepal. He was followed by others who actually built a church in Lhasa. These included the Jesuit Father Ippolito Desideri, 1716–1721, who gained a deep knowledge of Tibetan culture, language and Buddhism, and various Capuchins in 1707–1711, 1716–1733 and 1741–1745, Christianity was used by some Tibetan monarchs and their courts and the Karmapa sect lamas to counterbalance the influence of the Gelugpa sect in the 17th century until in 1745 when all the missionaries were expelled at the lama's insistence.
In 1877, the Protestant James Cameron from the China Inland Mission walked from Chongqing to Batang in Garzê Tibetan Autonomous Prefecture, Sichuan Province, and "brought the Gospel to the Tibetan people." Beginning in the 20th century, in Diqing Tibetan Autonomous Prefecture in Yunnan, a large number of Lisu people and some Yi and Nu people converted to Christianity. Famous earlier missionaries include James O. Fraser, Alfred James Broomhall and Isobel Kuhn of the China Inland Mission, among others who were active in this area.

Xian
Location #3 :  Daqin Christian Pagoda in Zhouzhi Xian China - Daqin Pagoda is the remnant of the oldest surviving Christian church in China. Located about 2 km to the West of Lou Guan Tai temple, this pagoda can be found in Chang-an, Shaanxi Province. The church and monastery were built by early Nestorian missionaries in 640. Daqin is the name of the Roman Empire in the Chinese language documents of the 1st – 2nd centuries.
Capital of modern Shaanxi, Xi’an has served as capital to 11 dynasties over a period of 4,000 years, including the Western Zhou, Western Han, Qin, Western Wei, Northern Zhou, Sui, and Tang. The Chinese trace its lineage  back even further to the mythical Yellow Emperor, who made Xiangyang his capital (2200-1700 BC). Xi’an peaked during the Tang dynasty, when its position at the eastern end of the Silk Road transformed it into a bustling metropolis, luring foreign merchants and faiths, including Christians, Muslims, Zoroastrians, Manicheans, and Buddhists.
The Daqin Christian stone tablet may be of more interest to western eyes. The stone tablet is topped with a cross and was carved in 781 to commemorate the arrival of Nestorian Christianity in Xi’an. The characters at the top of it refer to Rome (or Daqin) and  Christianity, the “Revered Religion”. The first Nestorians Christians arrived in Xi’an in AD 635. They thrieved in the city for two centuries.
Posted by David Michael at 5:05 PM No comments: 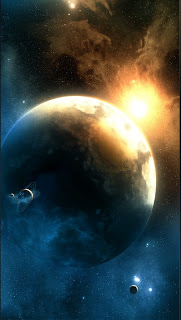 A believer has two principles at work within him. In his natural estate he was subject to one principle only, which was darkness; now light has entered, and the two principles disagree. Mark the apostle Paul's words in the seventh chapter of Romans: “I find then a law, that, when I would do good, evil is present with me. For I delight in the law of God after the inward man: but I see another law in my members, warring against the law of my mind, and bringing me into captivity to the law of sin, which is in my members.” How is this state of things occasioned? “The Lord divided the light from the darkness.” Darkness, by itself, is quiet and undisturbed, but when the Lord sends in light, there is a conflict, for the one is in opposition to the other: a conflict which will never cease till the believer is altogether light in the Lord. If there be a division within the individual Christian, there is certain to be a division without. So soon as the Lord gives to any man light, he proceeds to separate himself from the darkness around; he secedes from a merely worldly religion of outward ceremonial, for nothing short of the gospel of Christ will now satisfy him, and he withdraws himself from worldly society and frivolous amusements, and seeks the company of the saints, for “We know we have passed from death unto life, because we love the brethren.” The light gathers to itself, and the darkness to itself. What God has divided, let us never try to unite, but as Christ went without the camp, bearing his reproach, so let us come out from the ungodly, and be a peculiar people. He was holy, harmless, undefiled, separate from sinners; and, as he was, so we are to be nonconformists to the world, dissenting from all sin, and distinguished from the rest of mankind by our likeness to our Master.

Posted by David Michael at 3:01 PM No comments:

Get a CD at the upcoming concerts or at C-RCC Church in Castro Valley, CA. These CD's are available for a donation. This CD is filled with beautiful Chinese songs that will bless your heart! 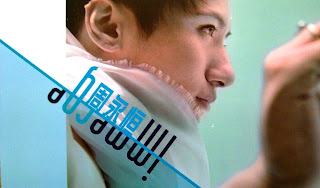 Featured in this CD is Roy Chow Hong Kong singer and movie actor. 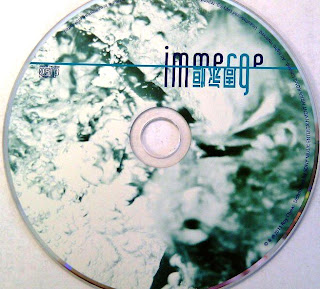 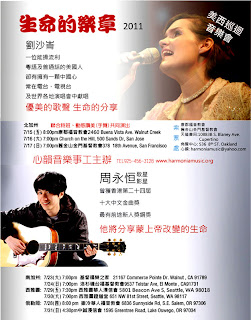 
Sharon and her husband are pastors of our home church in Hk. Check the photo for the exact locations...


This Friday in Walnut Creek...

Posted by David Michael at 1:28 PM No comments:

Update on Concerts - Samuel Lau wrote:
3 nights concerts around 3000 people came and over 100 saved, praise God.
3 workshops on Saturday morning &
2 sermons on Sunday morning.
Tried, but lot of joy in the spirit.
Done in Bay Area, heading to LA,
can have a short break :-)
‎"San Francisco East Bay Chinese" RCC Church (C-RCC) invites you to 3 concerts of our own Sharon Lau (Balcombe) from Hong Kong. Sharon and her husband Samuel are pastors of our home church in Hk. Check the photo for the exact locations...  This Friday in Walnut Creek... Saturday in San Jose.... Sunday in San Francisco
Posted by David Michael at 1:14 PM No comments:

Posted by David Michael at 1:08 PM No comments:

"The "San Francisco East Bay Chinese" - RCC Church is organizing an event of a life-time. Never before has there been a more important time to see God's plan for the future of China and other nations of the world like the United States. You can help shape and mold God' destiny for the foreseeable future.


This exciting opportunity has come up and we are happy to offer to those living in the United States and Canada a chance to go on a Group China Prayer Tour this coming Autumn. 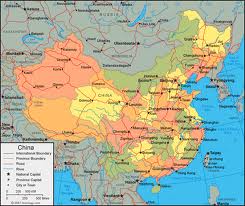